We know the sound waters on the Outer Banks because we're on it everyday! 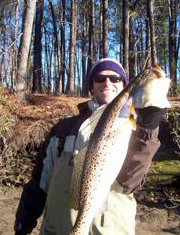 NC inshore fishing is something we take seriously at Carolina Sunrise.  We work hard to make sure we are aware of the changes that happen daily on the waters of the Currituck sound here on the Outer Banks.  While this takes lots of time to amass this knowledge and expertise, it is something that we are happy to share with our customers and friends.  Ultimately we believe the sharing of knowledge will help us become better NC inshore fishermen.  You never know which tip or trick might turn you on to a great day spent fishing.

The following excerpt from "The Wright Stuff", by Phillip Gentry published on April 26, 2010 in the North Carolina Sportsman Magazine details some of the tips and techniques that we use daily at Carolina Sunrise.

Ask Capt. Aaron Beatson of Carolina Sunrise Guide Service in Kill Devil Hills about his favorite mode of air travel, and he’ll invite you to climb the ladder to the flying bridge of his boat. From that vantage point, he scans the horizon for signs of feeding trout among the vast shallow grass flats of Kitty Hawk Bay.

Beatson specializes in inshore fishing the northern reaches of the Outer Banks and claims the Kitty Hawk area is vastly untouched, in the shadow of the Oregon Inlet area some 25 miles to the south. Like most OBX anglers, he fishes for everything that swims but has an affinity for trout fishing and says his backyard is a great place to find some gators.

“Most people who come to vacation here don’t realize how good the fishing can be,” Beatson said. “The area is very protected from the wind, and it’s a relatively small body of water when compared to Currituck or Albemarle Sounds. It’s a lot like fishing a small pond, only there are a number of creeks, points and shallow bars that are great places to catch speckled trout.”

Beatson offers some suggestions when heading out into Kitty Hawk Bay in search of trout. The first is to make note of any long points that stick out into the bay. Trout are ambush feeders and will hold on a long point very similar to the way a largemouth bass will, in fact it’s not uncommon to catch a stray largemouth in times of lower salinity. Beatson recalls some 20 years ago when they used to hold bass tournaments out of Kitty Hawk Bay and further north in Currituck Sound.

His second go-to area will be anywhere he can find moving water. Tide fluctuations are rarely significant in the Kitty Hawk area, but a steady wind out of the west or southwest will move water around these points. Other great moving-water locations include a number of bridge funnels that pass water from one side of Colington Island to the other or from surrounding marshes. He also suggests that much of the bottom in these areas will be covered in submerged grass and grass is a trout haven.

“Where there’s grass, there’s shrimp and where there’s shrimp, there’s going to be trout,” said Beatson. “Most of the grass will be submerged and may be hard to see unless the sun is high overhead. There are areas where the grass comes to the surface, and a floating mat of grass is a great place to throw a shrimp imitating bait.

“You can move around the grass to fish or boat upwind of any grass and just let the wind and current push you across the area while you cast to the grass or fan-cast open water. I have a lot of success throwing a Heddon Super Spook Jr. around the grass beds and working (it) over the top of submerged grass.”

One of Beatson’s dead giveaways to locating trout is to find an oil slick on the water. Seeing a slick is much easier in calm water and indicates the presence of feeding trout.

“Look for an oil slick, like gas or motor oil floating on the water. A round slick is better than a longer or oblong slick because it’s harder to determine which end the fish are on. It’s created by the blood and oils of baitfish that have been attacked by trout, and believe it or not, it smells like watermelon. If you’re running across the water and suddenly start smelling watermelon, cut the motor and start looking for that slick, because there’s trout feeding somewhere nearby.”

Beatson will often start his mornings out at the Wright Brothers Bridge over Currituck Sound (US 158), which is less than five miles from the entrance to Kitty Hawk Bay. He works the concrete pilings before heading to the bay. The vast expanse of structure may be intimidating at first, but they also hold a lot of trout.

“I usually start out with popping corks and use a Berkley Gulp! curlytail grub or shrimp under the float,” he said. “It’s only about a 10- to 15-minute run to the bridge from the public launch on Bay Drive at Mile Marker 6.5. You don’t need to run hard, because the water will shallow up quickly in some places. The main draw at the bridge is where I usually fish anyway. The deeper water edges hold more fish than the shallow piers.”

While he starts out with artificials, he’s not opposed to using live bait if he happens to come across some, especially around the bridge structure. If he lucks up on a pinfish, which readily attach the Gulp! baits, he’ll put the unlucky bait stealer back out under a cork or free-line the bait deep after cutting the fins off.

“A lot of bigger fish move under that bridge early in the morning, and using a live bait will often catch you a big redfish, flounder or hungry trout,” Beatson said. “Any kind of live bait that you can pick up — a live spot, pinfish, mullet or shrimp — works great.”

Since trout are typically surface feeders, he will employ a brightly colored popping cork to both attract the trout’s attention and suspend the bait a foot or so below the water’s surface. Suspending a plastic mullet or shrimp-imitating bait on a long-shanked jighead underneath a popping cork, and then positioning the cork beside a vertical bridge piling is usually more then a trout can resist.

“I’ll sometimes let the cork just sit and bob beside the piling,” he said. “This also floats my bait above any grass and keeps it free of submerged oyster beds. Probably the biggest reason I like corks is that they are a no-brainer to fish. Cast them out, pop them a few times and let them sit. You got a fish when the cork goes under.”

We accept all major credit cards!